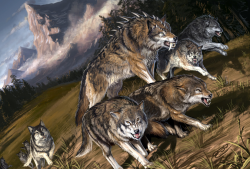 Last time the party ventured out to the Corn Family Farms to find the town's locksmith to open the mysterious chest. What they found instead were the farm's inhabitants - turned into sheep. When questioned, one of the pony-sheeps baa'd that some mysterious pony had played his magics here, but was interrupted by a pack of hungry wolves appearing from the nearby forest.

One of the wolves is severely wounded by Dewberry, but that wolf is also dangerously close to her. The other wolves have begun surrounding the pony-sheeps and the party, while the pack leader watches from a distance.

"Get back you stupid canines!"
Wrath.

>>285767
You misaim your cannon so that the cannon ball launches towards the blue sky and keeps heading up, until it can no longer be seen.

>>363452
Your bungle your spell so badly that its magical energies blow up on your face, stunning you. You are unable to attack for one turn.

One turn until the wolves have completely surrounded you all.

>>363469
Quickly, the world stops spinning and you can see normally again. The large gray-furred beasts stick out from the surrounding corn fields.

>>363490
While the spell isn't the strongest you've cast, it is still potent enough to work. One of the surrounding wolves is hit.

>>363496
Once again, you lose control of the spell, leaving you unable to attack, but not helpless.
>>363499
Your carefully aim your shot fire… The nearly dead wolf drops like a sack of potatoes.
>>363501
Swing! And miss, you hit Barque and none of the wolves.


Draw an arrow and fire the wolf that is attacking the others.
'1d10'

>>363507
The failures!
That was a cannon shot by the way, classified as great weapon.
Fire at the pack, a piercing shot!

>>363532
First wolf jumps towards Dewberry knocking her down and clearly moves its head towards her neck.

The second wolf heading towards Barque stumbles and does basically nothing.

The third, sinks its teeth into the buffalo's tasty meat.

Another jumps towards Barque and you feel its fangs sinking into you, before you kick it off.

Barque has lost one Hit.

The third takes a bite where one wolf already bit you.


>>363577
You easily slit its throat and blood begins flowing onto the ground.

>>363592
You charge and bump your head into one. You both feel slightly shook up, but other than that, your attack was fairly inefficient.

Another arrow is wasted as you miss.

>>363607
Your cannonball hits the wolf, doing some nasty damage and knocking it back half a meter.

>>363618
Another successful hit! The wolf is bleeding a lot and will die of blood loss soon.

>>363627
Dew finishes the bleeding wolf just as one chews Dew for a moment.

No more Hits left and BF has lost one Wound.

As you aimlessly swing your dagger staff around, a wolf surprises you and gnaws your arm.

>>363641
You feel the beast tightening its jaws - you can't focus properly due to the pain and fail the sit on the wolf. Instead you just sit like a noblepony.

>>363656
You could swear the dagger shines slightly before landing onto the wolf's skin. It cuts deep and you feel rejuvenated.

With that, I attack the wolf again and shoot it with an arrow!

>>363662
You successfully land several hits on the wolf. It's almost finished.

>>363664
Seven, or rather six as Dew kills one soon.
You successfully shake of the wolf. It's nose is completely covered in your blood.

>>363666
Your shot hits the wolf wounded by Barque's dagger and the beast dies.

>>363673
First two wolves heading for Barque and Dew run into each others and fail to reach their targets.

The pack leader begins to move towards you. Two rounds until it is within reach.

>>363681
You choose one of those approaching wolves and show what kind of master daggerdog you are.
>>363685
You are getting tired from combat and wounds and leave yourself open for a few seconds. The wolves use this gap to their advantage and rip off large chunks of flesh.

You are bleeding badly and death is imminent.

>>363690
I turn to Boasting Force and heal him.
"Weakling. You buffalo are supposed to be strong."
Oh crap I forgot I was a cleric.

>>363690
>and show what kind of master daggerdog you are.
Yeah, you also hit it also where it hurts.

>>363693
Your divine magic slightly illuminates your paws as you heal the battered buffalo.

BF has gained two Hits and has one Wound remaining.

>>363696
You feel your deity's strength flowing through you as more of BF's wounds close before your eyes. Not bad at all.

BF has four Wounds and his Hits are completely restored.


Just waiting for Sylt to post so I can write a reply and let the wolves attack again after that. Oh yeah, the pack leader joins the battle after that.

The pack leader howls, and even in bright daylight it chills you. -1 to all rolls. The pack leader's presence also inspires any nearby wolves.

Blood gushes out like out of a fountain. Your losing a Wound per turn now. In addition a wolf pounces you. You are helpless.

>>363719
You bravely stand before the pack leader itself, and its as tall as you are. A single wolf (the one that rolled 3) leaps towards you but you easily dodge it.

It treated that as a taunt basically.

>>363721
Encouraged by the pack leader one charges towards you and grabs your paw in its mouth giving it a good shake. You drop your weapons and lose three Hits.

>>363728
Still forgot the -1.
Like your earlier headbutt, this too remains unsuccessful.

>>363731
Oh, I thought we were supposed to wait and see what the rolls did.
I ignore my weapons and try to Heal Dewberry.
"Stupid filly!"

>>363733
They're incorporated into reply posts. Sorry, my fault. I can't really expect players to know these.

The bleeding stops just barely. The arrow keeps pointing out from her limb, but it can be take care of later.

>>363738
While your shot misses, it gains attention of the wolf assaulting the cleric and the wolf turns to face you.

>>363757
Your Wrath causes the damage your were expecting but the wolf is still capable of attacking.

>>363763
Clearly four legs are too much for you to handle as you trip. Helpless for one round.

>>363767
Suddenly Salty puffs into existence beside the party. Fires from hip and knocks out the pack leader. Roll penalties have been removed.

>>363776
Dewberry's wounds are yet again mended and the paleness caused by blood loss begins to fade.

>>363779
Buffalo ladies can be hear swooning from thousand of miles away by your classy nosedive.

I try to aim my arrow true. Attack the alpha with my bow and arrow.

>>363787
You're up again. Solidly standing on four feet.
>>363789
You hit the big bad wolf, but you also wake it up.
>>363791
Did you stop using marksman shot?
Despite the wounds you've suffered, your aim remains good and this allows you to hit the groggy pack leader.

Seeing the alpha, I try to hit the head.
Marksman shot
'1d10'

You strike several times as the beast struggles to rise on its feet.

You somehow managed to hit pack leader as it was busy with the cleric and the large wolf's head explodes its corpse drops.

The remaining wolves flee into the woods.

>>363812
The pony-sheeps are clearly shocked by what just happened but one manages stutter out: "Ye-ye-yess. Baa."

And I think we could pause now.